There are many reasons why a resident in Kendall County, Illinois may want to upgrade their furnace filter to something more efficient. Understanding the capabilities of the different filter types will help you in the selection of the type that will work best for you.

The most important function of a filter is its ability to capture particulate. The federal government has simplified this comparison process by requiring a standardized test and then assigning a rating. The rating number assigned to the filter is known as a MERV rating (Minimal Efficiency Rating Value) and is expressed in a value of 1 thru 16 with 16 being the most efficient. Particulate is measure by size with a Micron being the standard of measure. (1) one Micron is approximately 1/25,000th of an inch in size. A filter with a MERV 4 rating will capture particulate sized between 3 to 10 Microns at a rate less than 20% efficiency. The standard 1″ wide pleated filter that you most likely have in your furnace now is rated at a MERV 8, this unit will capture particulate sized between 3 to 10 Microns at an efficiency rate of 84.9%. A filter with a rating of MERV 16 will capture particulate sized between .3 to 1 Micron at a rate of 75% or higher. Since this filter captures smaller particulate it will be more restrictive to your air flow, therefore, the area of the filter must be increased as to not create a restriction to your air flow. So as a rule of thumb, filters that get a rating of MERV 11 or higher typically have 4″ deep pleats which will require a dedicated housing that will require sheet metal transitions. 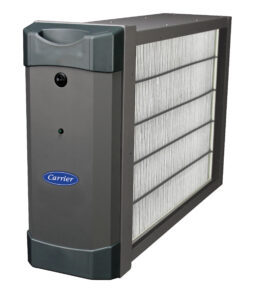 The next capability you want to research is the filters ability to kill biologicals. Many mold spores, mites and viruses may actually be smaller than 1 micron and will escape the capture function of many filters. The use of electric to ionize the particulate entering the filter and put a positive charge onto the particulate and having the filter media ionized with a negative charge will do a better job at capture since opposite charged particles attract. If the particulate is a biological, the current passed thru it as it enters the filter will kill, destroy and then capture.

RJ Kuhn in Oswego, IL. has been serving the residents of Kendall and the surrounding counties since 1972. We are qualified to listen to your objectives and provide guidance in selecting a product that will meet your needs. Whether it may just making sure your pets do not plug up your evaporator coil when shedding their winter coats or eliminating allergens and virus bacteria from your air flow, we can provide you with a product that will allow you to take back control of your home’s environment.

What Our Clients Say...

Thank you for your honesty when servicing my air conditioner. When I called, I thought I was needing a new one and I wouldn’t have known any better.